In April, I conducted a survey to software professionals on the topic of software quality. Today, I present the results from this survey, adapted from my final report.

The survey consisted of 23 questions, and was administered online using kwiksurveys.

In total, 75 responses across 21 countries and more than 17 companies—not all subjects specified their place of work—were accumulated. The table below shows the full breakdown of the frequency of responses by country.

When asked which definition best defines software quality, responders overwhelmingly choose "a broad mix of factors" (77%) over "fit of need" (17%) and "lack of defects" (5%); however, the latter two definitions weighted heavily in the responders' perceptions of quality. When asked to rank a set of eight quality factors in how important the factors represent code quality, Correctness and Reliability were predominantly ranked first and second, respectively. These results confirm the quality definitions found in the literature, with both the Correctness (i.e. "fit of need") and Reliability (i.e. "defects") attributes standing out from the others. With quality in manufacturing very much tied to defects and reliability, it is interesting that, here, "lack of defects" was thought to be less important than "fit of need."

The figure below shows a graph of the rank selection distribution for how important the subjects felt each attribute represents quality. 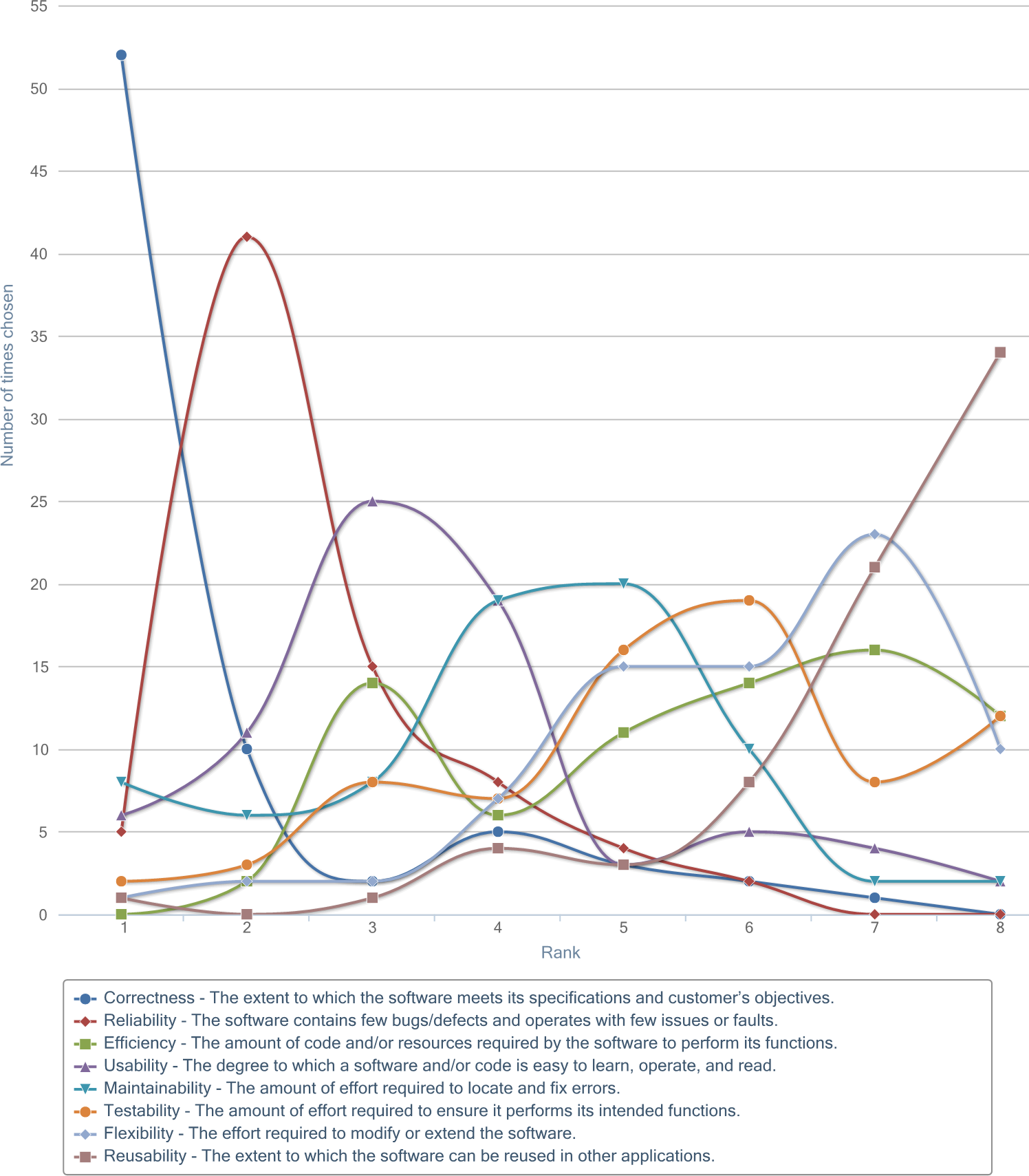 Ranks given to attributes for importance in representing code quality.

The table below shows the attributes sorted by their weighted-average ranking.

By far, the most important attribute was Correctness, which was placed in the first rank by nearly 70% of the subjects. Second, third, and fourth ranks were also clearly shown to be Reliability, Usability, and Maintainability, respectively. Reusability was clearly the lowest ranked factor, on average, while the remaining three factors (Testability, Efficiency, and Flexibility) were tightly bunched between the fourth and eight ranked factors. While most factors display a single peak within the rank positioning, Efficiency was the only factor that demonstrated two distinct local-maxima (centered around ranks three and seven), suggesting that this factor may have importance in only certain environments or applications.

Subjects were then asked to rank three popular trade-off factors (cost, quality, and schedule) in how influential the factors were for a typical software project at their company. The responses predominantly showed schedule ranked first, quality ranked second, and cost ranked third, with resulting weighted-rank averages of 1.69, 1.93, and 2.32 (out of 3), respectively. The figure below shows the full rank distribution for all three factors.

Rank distributions of schedule, quality, and cost influence for a typical software project.

In a follow-up question to responders who ranked either schedule or cost as more influential than quality, (summarized) reasons given for their selections included:

Although quality was not ranked as a top consideration for software projects, it was reassuring to learn that the majority of subjects did report on their teams' regular use of multiple methods during the development and/or release process for improving quality. The complete tally of responses can be seen in the table below.

The most popular method used was "informal discussion with colleagues" (84.0%), followed closely by "automated testing" (78.7%) and "human quality assurance (QA) testing" (77.3%). The least used method was "software metrics", which received marks from only 17.3% of responders. The two responses marked "Other" both made mention of static code-analysis tools. The minimal use of metrics as a method for improving quality is disconcerting since it shows that most development teams do not quantitatively know if, or to what degree, their current quality improvement methods are helping them.

When asked to elaborate on methods used for improving quality, including how and why they are used, the result was a wide range of responses, with most describing choices that were provided in the previous question. Notable answers not included in the answer choices included: refactoring, bug monitoring, coding guidelines, stress-test tools, branching strategies (e.g. feature branching), and continuing education. Additional insights gathered on choices that were presented include:

Out of the 75 total subjects, 10 (13.3%) responded that their team does not use any methods for improving quality. Reasons cited included: tight deadlines, lack of time, lack of experience, bad tool support, non-production software, too many projects, lack of management, and team/company culture. The multiple mentions of time constraints here align with the earlier results that show schedule as a more influential trade-off factor on software projects over quality.

In the previous section, it was shown that software metrics was the least utilized method for improving quality as part of development processes. However, when asked if their team currently utilizes any metrics for the intentional purpose of improving code quality, just over half of the responders (38 of 75) answered "yes."

The subjects were then asked how regularly their team used metrics to evaluate seven different areas, which represented a one-to-one mapping to the measurement goals derived in the Goal, Question, Metric (GQM) exercise (not presented here). Answer choices were a frequency-type Likert scale with the following labels: Never, Rarely, Sometimes, Regularly, Constantly. The figure below depicts the choice distributions for all seven measurement areas, and the table below shows the measurement areas sorted by most frequently used (a weighted-average ordering assuming approximately equal intervals of the frequency-type Likert scale, with values 1 to 5 representing "Never" to "Constantly", respectively). 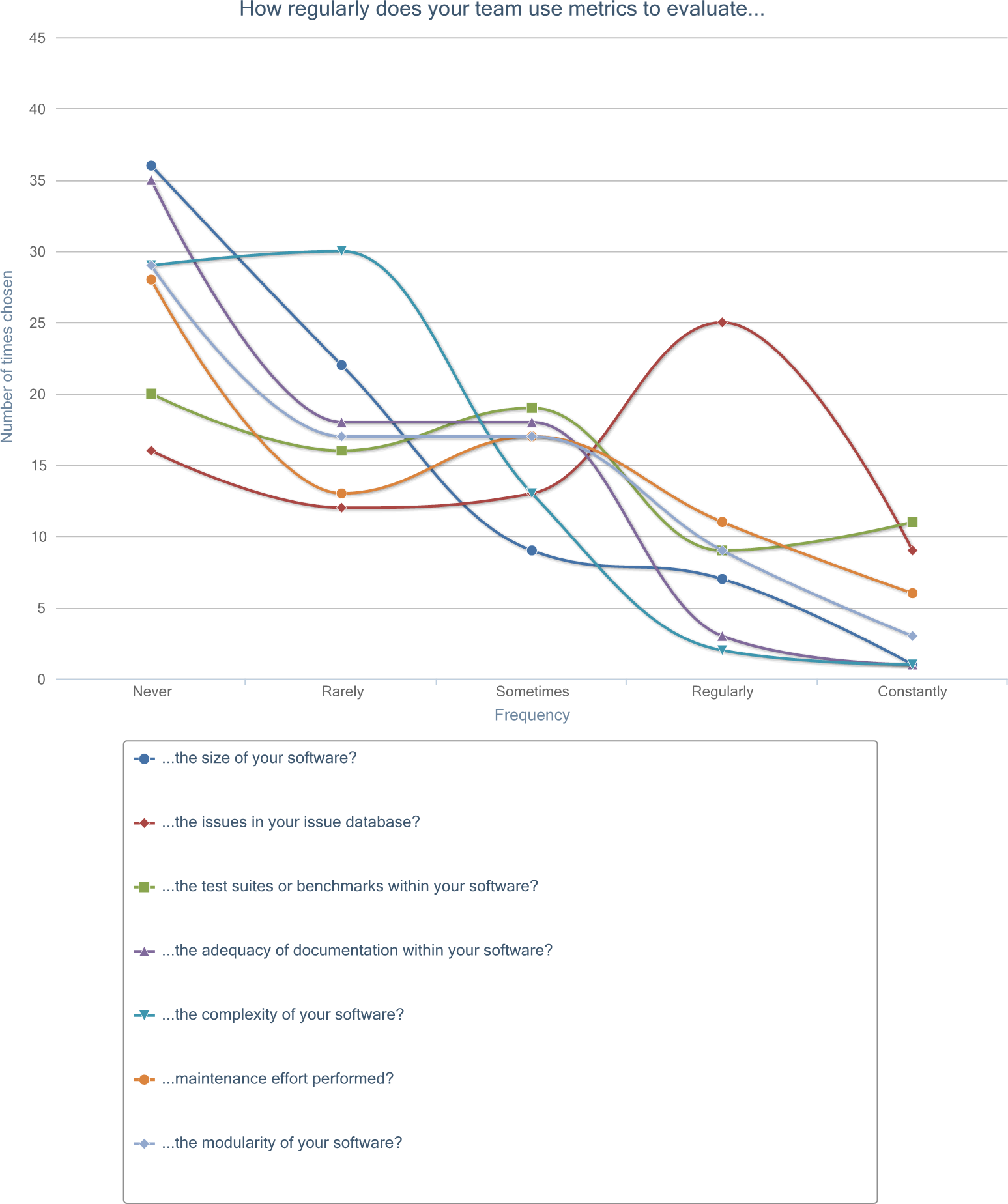 Distributions of the frequency that teams make use of metrics to address measurement goals presented in GQM exercise.

While over half of the responders answered "yes" to currently utilizing metrics for improving code quality, they did so at a very low frequency in each of the measurement areas questioned. Only two areas (issues in issue database and test suites or benchmarks) had a median frequency above "Rarely," and were also not much more utilized themselves with a median frequency of "Sometimes." Likewise, only two areas had a most-selected frequency above "Never"—complexity of software had a mode of "Rarely" and issues in issue database had a mode of "Regularly." Issues in issue database was the most-frequently utilized metric area, clearly seen as on outlier within the "Regularly" frequency choice in Figure measurement goal frequency. In fact, aside from that single outlying point, there is no metric area for the "Regularly" and "Constantly" frequencies that had more selections than the least-selected metric area for the "Rarely" and "Never" frequencies.

Next, the subjects were asked to rate their knowledge and use of 28 different metrics on a Likert scale consisting of the four choices: Never heard of or do not know, Know of but have not used, Have used before, and Use regularly. The list of metrics used for the survey was primarily taken from a GQM derivation (omitted from this post), and was found throughout a range of topics in the software engineering literature, including:

The table below shows the full count (and percentage) breakdown of responses for each metric. The data is sorted by highest weighted average (assuming approximate equal intervals of a Likert scale, weighted from 1 to 4 representing the selections "Never heard of or do not know" to "Use regularly"), which allows identification of the central tendency of selections for each metric.

From the data collected, several insights were captured:

The survey to software professionals also included four questions on the topic of visualizing software metrics. Overall, responders overwhelmingly felt that it would be useful to visualize metrics about their software projects over time, with over 81% who either agreed or strongly agreed with this statement and less than 6% who either disagreed or strongly disagreed. However, when asked if their team currently uses any tools to visualize software metrics over time, less than 30% answered "yes." In a similar question, subjects were asked how likely they would be to use a software metrics visualization tool to help improve the quality of software they write. Here, responders were also positive, albeit slightly less enthusiastic. The majority of responders fell into the likely (42.7%) or neutral (25.3%) segments, with an equal percentage (14.6%) in both the unlikely and very likely segments. The full results for these two questions can be seen in the tables below.

On the topic of visualization tools, subjects were asked how they would like to use such a tool (see figure below for a chart of all responses). The most popular choices, selected by about 61--71% of the responders, were: integrated into build/test server, integrated into issue tracker, and a self-hosted, stand-alone product with web interface. Least popular were: integrated into editor/IDE and a hosted service with web interface. Four responders filled in a selection for other, mentioning a dedicated build server, as well as a script or command-line interface.

Number of responses on how subjects would like to use a tool for calculating and visualizing metrics describing their software.